Stations of the Cross

13th Station ~ Jesus is Taken Down from the Cross

Jesus died on the cross. The two men on either side of Jesus had their legs broken but not Jesus for they saw he was already dead. One of the soldiers pulled his lance and pieced his side and out poured blood and water. Mary, her sister and John, the beloved disciple stayed and stood by Jesus’ side. Finally, Joseph and Nicodemus came, took him down, and laid him in the arms of his mother. Her pain I cannot fathom.

There is a story that after President Lincoln was assassinated great crowds gathered up and down the Washington streets where his body would pass by – there was a black woman holding her tiny child. When the caissons and the horse drawn carriage passed she held up her baby and whispered, “Take a long, long look, he died for you.”

We too can say standing at the Cross, “Take a long, long look, he died for you.” 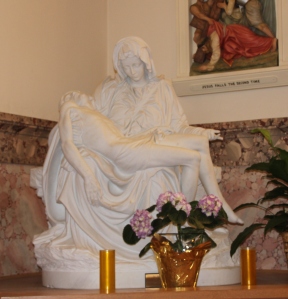